How does the wireless link quality impact RPL rank calculations in IoT? Print

RPL implementation in NetSim is as per RFC 6550. As per RPL protocol RFC 6550, "The Rank can be considered a scalar representation of the location or radius of a node within a DODAG Version." and "The exact calculation of the Rank is left to the Objective Function."

The objective function in NetSim RPL seeks to find the route with the best link quality.
The link quality and the radio range of a node in NetSim, are affected by the following factors:

c. Receiver sensitivity (Lower Rx sensitivity leads to higher range. Rx sensitivity is in negative dB, hence lower means more negative).
Also, the distance between the nodes will have an impact on the received signal strength since path loss increases with distance.
In the network sample shown below,

the following settings are done, which will have a direct impact on the radio range of the devices:
Length of the grid environment: 1000 x 1000 meters
Wireless Channel Characteristics (Adhoc Link Properties): Path Loss Only (Log Distance with Path loss exponent=2).
ZigBee Node's Transmitter Power: 1 mW
Receiver Sensitivity: -85 dBm
For the above settings the ranks computed and DODAG formation is as per the figure shown below: 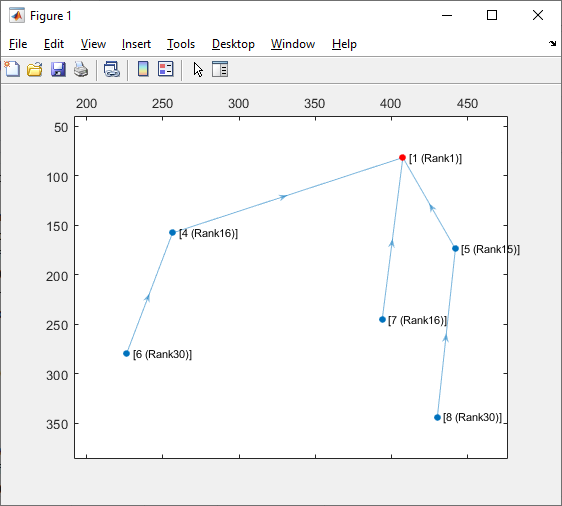 the settings are as follows:
Length of the grid environment: 1000 x 100 meters
Wireless Channel Characteristics (Adhoc Link Properties): No Path Loss
ZigBee Node's Transmitter Power: 1 mW
Receiver Sensitivity: -85 dBm
For the above settings the ranks computed and DODAG formation is as per the figure shown below: 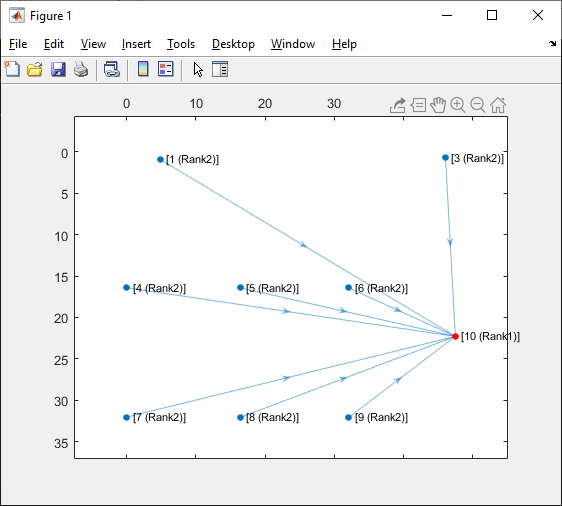 Node 10 which is the gateway acts as the root and has the rank value of 1.
Since, there is no path loss configured, the signal strength does not get attenuated with distance. Hence, all nodes are assigned with a similar rank value of 2 and become children of the root node.
For the same network scenario, once channel characteristics is set to Path Loss Only (Log Distance with Path loss exponent=2), we get the following DODAG: 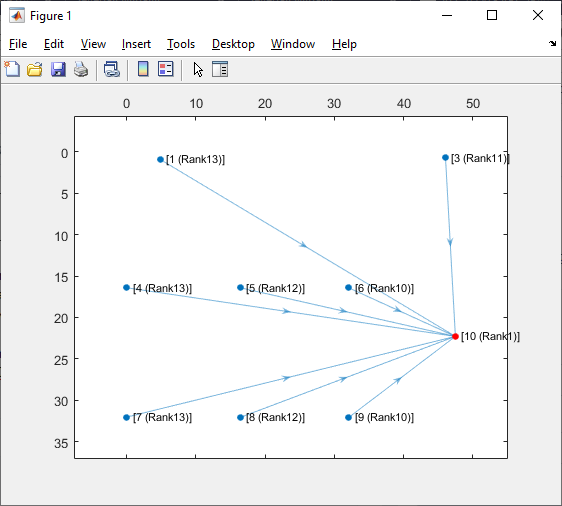 You can see that the ranks calculated are different when compared to the previous case. This is because the link quality varies based on the path loss. However, the nodes are still within the range of the Gateway as the grid length and the distance between the nodes are very less.
When the Path Loss exponent is set to a higher value of 4 we get the following DODAG with some of the nodes out of range of the Gateway and hence multiple levels in the DODAG: 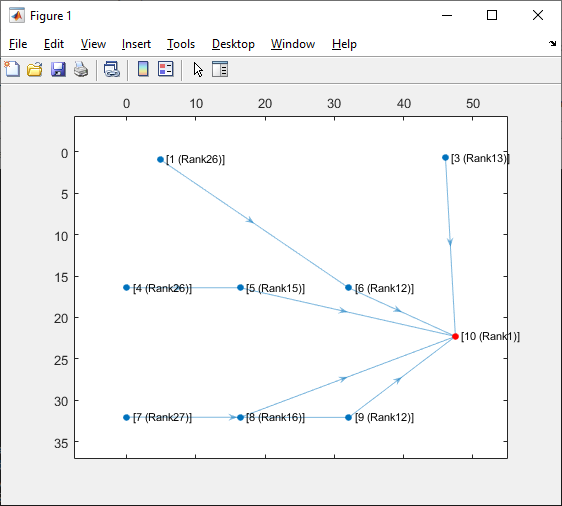 Similarly, as parameters that affect the radio range of the nodes are varied, you can see it's impact on the rank calculation and DODAG formation.
Route formation plots with Rank information as shown for the above cases can be obtained for IoT network simulation, using our file exchange project: RPL-DODAG_Visualization_v13.0